Interview with Raul Black of HousingCorrection.com: “The market will eventually heal itself.”

Today we bring you an interview with Raul Black of HousingCorrection.com, which contains a collection of online house valuation tools. Below, Raul shares his thoughts on housing prices, buying versus renting, and foreclosure.

Mortgage Calculator: I’d like to begin by asking you about your background. What made you decide to join the ranks of housing watchers? How would you summarize your approach to the (current) housing market, and how has your background informed this approach?

In 2005 I began searching for a house near my place of employment in order to reduce my 3-hour round-trip commute. I couldn’t help but notice everything in my region seemed overpriced. I began exploring housing data in an effort to understand why prices appeared to be unsustainably high. I wound up becoming hooked on the subject matter.

My approach to understanding the housing market is highly data-concentric, which fits well with my occupation as a data analyst. Unfortunately, data tells a large part of the story, but it doesn’t tell the entire story. If prices maintained strict relationships to popular fundamentals, we would have never had a housing bubble. Thus, I attempt to balance my data-driven approach with other techniques such as observing market psychology and using good old fashioned common sense.

Since random unforeseen future events have not been captured in my historical data sets, betting the farm on a promising historical pattern is not my goal. Instead, I attempt to assign relative probability measures to various potential outcomes and continue to adjust these forecasts as new data arrives and my understanding of the subject increases.

Mortgage Calculator: It seems both the housing bubble and its bursting have been characterized by important regional disparities, so it’s not really meaningful to make generalizations on a national basis. Do you think that the recovery, whenever it cements itself, will also adhere to this pattern? Based on the data that you diligently display on your website, are their some markets that you would avoid, but other areas that you would gravitate to?

The price of each region is a function of local, national, and global economic factors. In my opinion, global and national economic factors (such as the Fed’s open market operations) will continue to influence price, but so will each region’s individual economic situation. Thus, we’ll see general national trends accompanied by continued price disparities among regions.

Northwest cities such as Seattle, WA and Portland, OR have a high probability of continued depreciation due to prices being well out of line with historical fundamentals. Despite prices being extremely cheap by historical standards in Phoenix and Las Vegas these areas still have extremely high foreclosure heat and will most likely continue to correct. Further east, I’m negative on Chicago and New York. That’s kind of a popular forecast of the Case-Shiller 20, but it fits well with what I’m seeing.

There are areas in the U.S., such as Sioux Falls, SD and Lincoln, NE that have remained more immune to the housing bubble and the national economic downturn than others. Buying into this pattern is a safer bet than buying in cities that ran way up in price, got nailed by the economic downturn, and have yet to come back to earth. 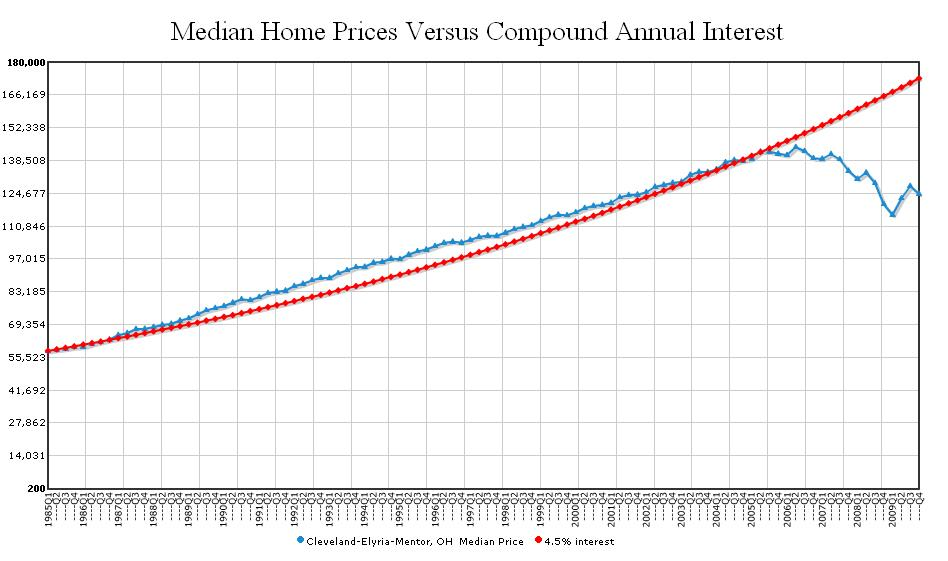 Areas, such as Cleveland, that appreciated at a steady rate over the long term and were hit by the economic downturn could be setting up for modest gains if the economy continues to improve. 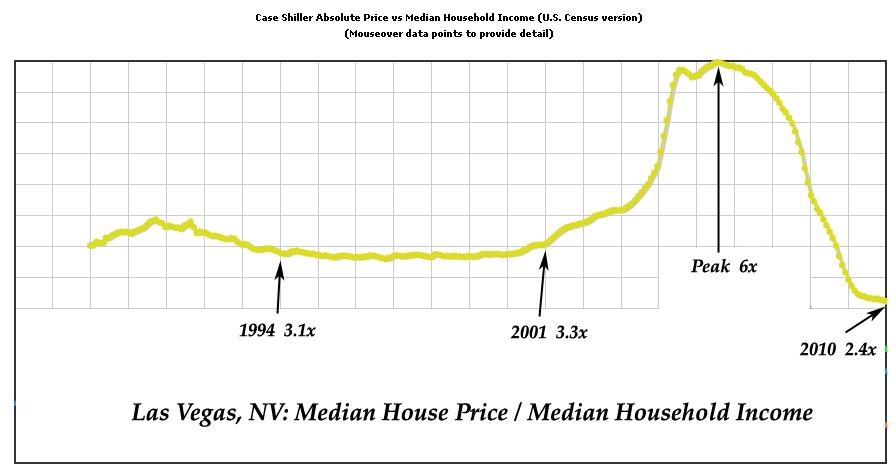 Given time, bubble cities such as Vegas will look like outrageous bargains. But don’t jump too soon, or you could get burned by continued foreclosure problems.

Mortgage Calculator: What do you think it will take for people to accept the notion that home prices don’t appreciate much faster than the rate of inflation, over a long-term period of time?

I think the short answer is time. It will most likely require several years before people develop fresh memory patterns that become etched deeper than the memory of their euphoric bubble experience. In the meantime, I believe lots of people will lose their homes and their money. Losing money tends to have a sobering effect on optimistic mania.

Mortgage Calculator: HousingCorrection.com suggests that housing prices will continue to fall. Is this based on the forecasting tools available on your website, other experts, or your own intuition?

It’s based on a combination of all three factors. Using data-driven techniques, I have attempted to test a number of experts’ forecasts. In doing so, I’ve learned at least as much from others as I have from studying the data. As for intuition, I believe it can be a powerful tool when used in limited amounts. However, it’s important to not get intuition confused with emotion. In my experience, emotion-based decisions generally yield a poorer return on investment than decisions arrived at through logic and intuition.

I trust what the data says. Foreclosures will continue to cause distress in the market for the next several years.

The government is good at applying bandages that temporarily conceal gaping wounds, but they have little experience fixing deep underlying economic problems. A good example is May existing house sales. Most experts expected more homes to sell in May than April due to buyers having rushed to beat the tax credit deadline. But when the data came out, it showed that sales dropped. The government has a poor reputation when it comes to bang for the buck.

Bringing back high-paying jobs in this country is a much better fix for the housing market than government gimmicks aimed at propping up prices above what people can afford to pay. Our nation’s leaders have thrown a kitchen sink full of expensive gimmicks at the foreclosure problem; yet, RealtyTrac track indicates bank repossessions hit a record monthly high in May.

Knowing that the government’s ability to bring house prices back to bubble levels is severely restricted, who wouldn’t be tempted to mail their keys back to the bank if they were underwater on their home? Despite what most real estate agents claim, homes typically represent highly leveraged investments. When you gamble and win, it’s great! When you gamble and lose, you renege. The banks did it, and homeowners are doing it too. If provided a path, it’s human nature to walk away from bad deals.

Mortgage Calculator: Do you generally believe that renting is more economical (and more sensible!) than buying, even when the ratio of rent to home prices is more in line with long-term averages?

I believe different people extract different forms of value from homes. Owning a home within your financial means can provide a sense of belonging, stability, and security. However, that same home outside of your financial means becomes a nightmare. On the other hand, renting relieves occupants of numerous responsibilities and allows packing up and moving without having to pay 8% of the home price for taxes and real estate commissions.

It is up to each individual to measure the value they get out of renting the home compared to purchasing it. From a purely investment standpoint, I would be very reluctant to purchase a home in my area that is not rentable as cash-flow positive after having put 20% down. Anything outside of this range sets off warning signals for me. If a home doesn’t make financial sense to me as an investment, it doesn’t make financial sense as a personal residence.

Mortgage Calculator: How would you reconcile government and seller incentives and low interest rates with the possibility that home prices could fall further, when advising someone thinking about buying their first home? Would you advise them to buy, wait for a while, or wait forever?

Government incentives are great for house sellers but they are not always favorable to house buyers—especially when offered at the bust end of a pyramid scheme. They tend to temporarily inflate prices but, once the support is withdrawn, prices continue to correct. With seller incentives buyers pay more in order to get perks that must be paid for over the life of the loan. Low mortgage rates only make sense if you are buying in an area that has overcorrected to the point of prices being cheap by historical standards. Otherwise (barring wage inflation) when rates go up, house prices will go down so that buyers can afford the monthly payments.

It’s typically very difficult to save a down payment because rising home prices eat into the cash you save. The current environment of flat to declining home prices provides an unusually good opportunity to live frugally while saving up down payment equity. In most cases, I recommend keeping an eye on the jobs data in your area, as it is a leading indicator of where house prices are heading. While unemployment is high, saving a down payment is a much safer bet than attempting to catch a falling knife.

Ultimately, whether to buy or wait depends on your job security, the area where you live, what your specific needs are, how long you plan living in the home, your views on future inflation and the future of jobs in your region, and several other factors. If you’ve decided you need to buy a house, don’t buy the first house you see, and don’t depend on your real estate agent to be the expert. Do your own research and become informed about your specific market. In addition, it’s important to keep your impulsivity and emotions in check during the buying process.

In my opinion, the market will eventually heal itself. Increasing population growth accompanied by record low building starts will eventually improve the supply/demand ratio. It’s important to become an informed buyer in the meantime. This provides insurance against becoming one of the millions of foreclosure casualties throughout the country.

Posted by Adam | in Interviews | Comments Off on Interview with Raul Black of HousingCorrection.com: “The market will eventually heal itself.”