The new Tax Cuts and Jobs Act tax bill which will go into effect on January 1, 2018 is expected to be signed into law in the next two weeks.

Here are some of the highlights of how the bill will impact homeowners.

Interest on loans for purchasing first or second homes is deductible. The mortgage debt eligibility cap was lowered from $1 million to $750,000.

Homeowners which have mortgages in place by December 31, 2017 will be grandfathered into the old $1 million cap.

Here are more specifics on the grandfathering clock

Interest on a HELOC or home equity loan is no longer tax deductible unless the debt is considered origination debt, which would require the debt be used to pay for building or substantially improving a property.

Homeowners have built up significant home equity since the housing price crash nearly a decade ago. Mortgage debt is up only modestly over the past few years after declining throughout most of the housing & economic recovery. 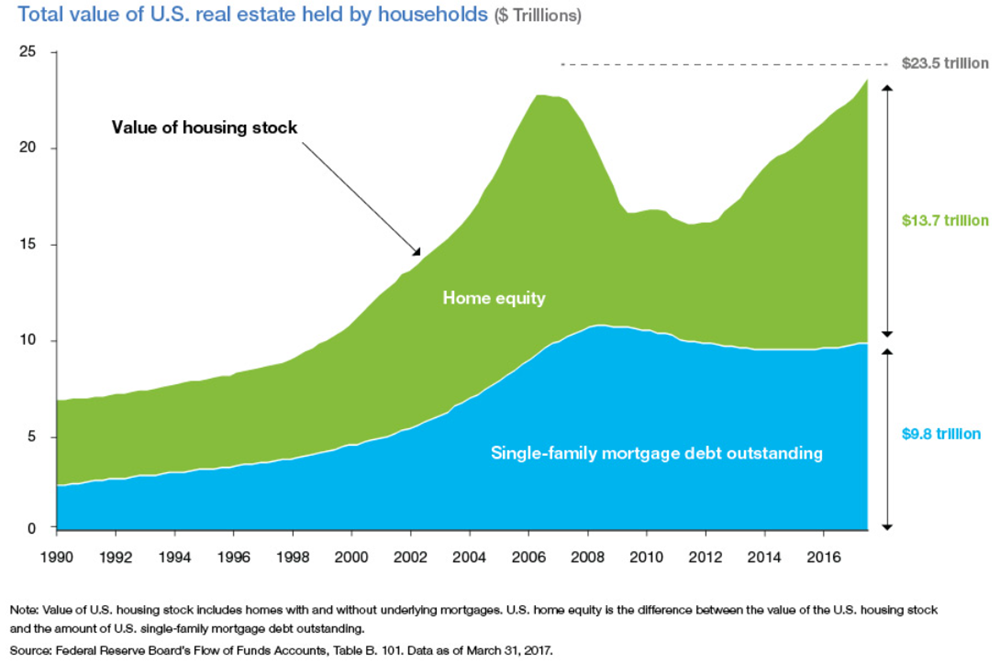 TransUnion put out a report in October where they suggested 10 million borrowers will take out a HELOC between 2018 and 2022.

The TransUnion HELOC study found that rising home prices and the resulting increase in equity is beginning to fuel interest in HELOCs. The Case-Shiller home price index rose as high as 180 in 2005 and 185 in 2006 before dropping to 134 in 2012. By July 2017 it had risen again to 194, and is expected to rise in the next few years to well over 200.

“While HELOC originations often track with home equity, which is correlated to rising home prices, we found that the rebound in HELOCs diverged from the recovery in home values following this past recession,” said Mellman.

Mortgage refinancing dipped from about 48% of the market in 2016 to 33% of the market this year. It is expected to fall further to 25% of mortgage originations next year. With tight home supplies home equity lines were expected to be one of the few areas of growth across the industry. It remains to be seen if this shift in tax treatment will impact the growing HELOC demand.

Currently the child tax credit begins phasing out at $110,000. The proposed bill would lift the phase-out to $400,000. Other dependents who are not children also provide a $500 credit.

Deduction capped at a maximum of $10,000 of some combination of property tax along with either income or sales tax.

The combination of lowering the cap on mortgage interest & limiting SALT deductions could have a significant impact on some expensive real estate markets in high tax areas. An article in the Wall Street Journal stated:

Limiting those state and local tax deductions, home prices in Manhattan could fall as much as 9.5%, according to an analysis by Moody’s Corp.

Only considered deductible if they happen during an event the president officially declares to be a disaster.

While some military members will still be able to deduct moving expenses, most people will no longer be able to do so.

Divorcees who pay alimony will have to pay tax on the income, while those receiving the alimony will no longer be required to pay income taxes on the funds. This change will go into effect in 2019.

Posted by Adam | in Government Programs/Legislation | No Comments »