A few months have passed since I last offered an update on the state of the housing market. Since then, there have been a number of developments which suggest that 2011 could witness double-digit declines in housing prices, and that the long-awaited double-dip will finally materialize.

In an analysis of the housing market, it’s difficult to know where to begin. So much has been written on this topic over the last month and a trove of new data [Gary Shilling has dutifully compiled all of this data in a must-read research report] has been released, to the point that I experienced an acute case of information overload when researching this article. Here’s where we stand: the bellwether Case Shiller Housing Index “has risen 4.4 percent from its April 2009 bottom. But it remains 29.6 percent below its July 2006 peak.” According to some measures, this is already a larger decline than that which transpired during the Great Depression. While the national housing market stagnated in 2010, there was tremendous regional disparity. While prices fell ~20% in Dayton and Columbus, Ohio, they actually rose in 70% of major markets, including Washington DC (5%) and Honolulu (7.5%).

Meanwhile, the number of foreclosures also exploded: “Banks seized more than 1 million homes in 2010, according to RealtyTrac. That was up 14% from 2009 and the most since the company began reports in 2005….About 3 million homes have been repossessed since the housing boom ended in 2006…That number could balloon to about 6 million by 2013.” While the number of foreclosures fell in December because of legal uncertainty over the rights of lenders to repossess, delinquencies and defaults are still rising, and foreclosures will almost certain follow. 10% of all residential mortgages are now past due, and 4.5% are in foreclosure. (5 States: California, Arizona, Florida, Illinois and Michigan have accounted for more than half of the foreclosures). In addition, distressed properties accounted for about 30% of all home sales in 2010. 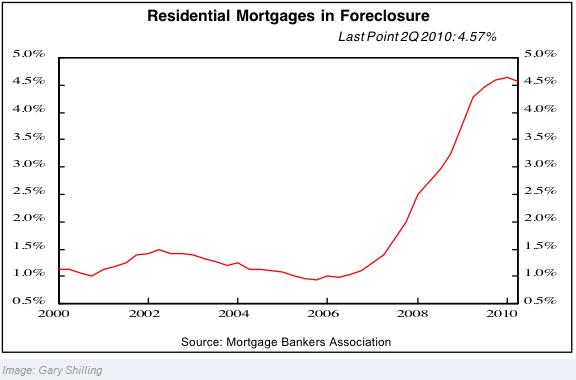 The clear consensus is that the only reason that the housing market didn’t completely collapse in 2010 is because the government intervened, in the form of a homebuyers tax credit. In hindsight, the tax credit merely pulled demand forward, instead of creating new demand. According to economist Nouriel Roubini, “If you look at the data, Case Shiller has been falling every month since the tax credit expired in May. Everyone who wanted to buy a home did so by April. That tax credit stole demand from the future…”

Going forward, there is more reason than not to believe that further declines are in store. There remains a massive shadow inventory of unsold foreclosed properties, which will expand further before it contracts. Mortgage rates have ticked higher in recent months from record lows, and besides, tighter underwriting standards are making it more difficult to obtain a mortgage. (Fannie Mae and Freddie Mac now underwrite almost 100% of residential mortgages). Meanwhile, the economy has only just escaped from recession, consumer confidence is low, and unemployment remains at a 30-year high of ~9.7%. Even if you ignore the fundamental picture, econometric analysis suggests that housing prices have yet to “revert to the mean” of their long-term trend. Based on almost every measure, housing prices are still above historical levels, rent ratios remain high, and affordability indexes reflect inflated prices. From a purely financial perspective, then, housing prices would have to fall 20% in order to offset the appreciation of the bubble years. Moreover, it’s possible that the correction will “overshoot,” in which cases prices could drop by 25-30% before resuming their long-term average rise of 3.5% per year.

Yet, there are some economists who are cautiously optimistic. According to in Frank Nothaft, chief economist of Freddie Mac, “I do think we’ll see these housing prices bottom out, maybe by the spring.” Due to a drop-off in new housing developments, supply (not including the shadow inventory) is low. There is also hope that the economy will recover, and lift employment and consumer spending with it. As one columnist summarized, “The minute Americans see a real reason for hope…housing will come roaring back.” Even the most dire housing forecasts concede that some regional markets will probably rise in 2011.

From where I’m sitting, however, there really isn’t cause for much optimism. Unless you live in Hawaii or Texas, the next year (or two or three) will probably witness further declines.