Last week, I reported that mortgage rates have declined to another record low. Unfortunately for the housing market, the resulting uptick in mortgage activity was dominated by refinancings, and there is little evidence that low rates are spurring new borrowers. This is confirmed by the updated S&P Case Shiller Index, which shows that while prices are still rising on average, they are rising at a slower rate than before and appreciation could soon turn negative.

Morgan Stanley may speak for everybody; “It expects 2011 home prices to fall 5% to 10% from this year with four years of flat prices after that, although ‘the risk of slight additional downside in prices, and extension of the trough to 2012, has increased.’ ” Most of the government home-buying incentives have expired and lending standards have tightened. If the government doesn’t continue to support the mortgage industry, declines could be even more significant. 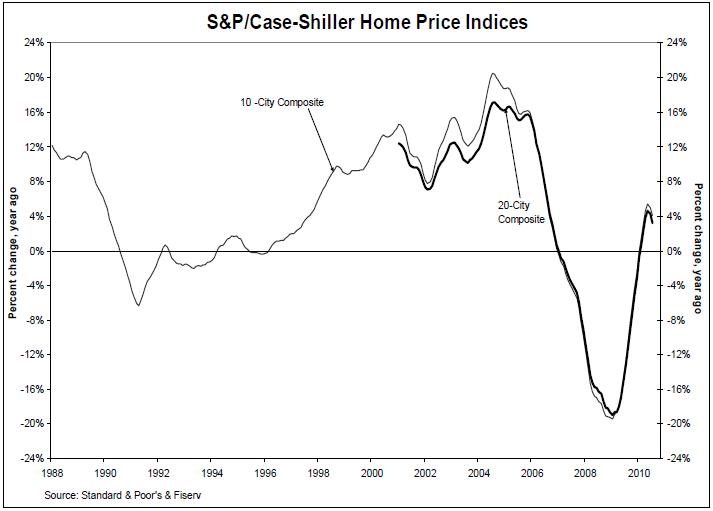 The biggest variable is the ongoing foreclosure scandal, in which lenders have conceded to fraudulently processing foreclosures for tens of thousands of borrowers. As a result, foreclosure listings have been pulled until the investigation is resolved. Most analysts have argued that this will be roundly negative for the housing market, especially in depressed areas were foreclosure sales represented the brunt of buying and selling: “These delays ‘are just going to cause more chaos and confusion. At this point, this is probably the nail in the coffin for housing. I think worse times are still ahead of us.’ ” As a result, the shadow inventory of foreclosures will be unable to clear, and prices continue to fall.

While I think this is a reasonable argument, I think the opposite interpretation is also justifiable. Think about it- if the foreclosure probe causes the housing supply to shrink, should that shift the balance back in favor of sellers. Of course you could argue that the shadow housing inventory will continue to exist, or that buyers who would have foreclosed properties now won’t buy anything, or that lenders will be stuck with these properties on their books and will cut down on new lending to compensate. Still, the shrinking of supply should have at least a temporary stabilizing effect on the market. Incidentally, Shaun Donovan, head of the Department of Housing and Urban Development (HUD) has sided with the majority in this debate: “A national, blanket moratorium on all foreclosure sales would do far more harm than good — hurting homeowners and homebuyers alike.”

If you’re in the market for a home, you should probably stay away from foreclosed properties for the time being, due to uncertainties over title. Otherwise, remember that there is not one national housing market but hundreds of regional markets. Each of these markets has its own nuances, and may be governed by different trends and demographics. Some markets remain depressed, while other markets have barely suffered. [For value shoppers, Coldwell Banker compiled rankings of the most/least affordable markets]. Finally, consider that it’s still a buyers’ market and that there is certainly no rush to buy. If historic trends are any indication, prices will decline slightly as we move towards winter, a period when the market usually slows down.

Update: the above link to hlr.coldwellbanker.com went offline, so I updated it to reference the current file location.

Are you paying too much for your mortgage?

Find Out What You Qualify For

Check your refinance options with a trusted lender.

Answer a few questions below and connect with a lender who can help you refinance and save today!