Over the summer, the Government Accountability Office (GAO) released a report on the IRS handling of the Home Mortgage Interest Deduction. Despite being published with little fanfare, the report was widely circulated and could lead to big changes to the tax treatment of mortgages.

As almost everyone who takes out a mortgage is certainly aware, mortgage interest payments are tax deductible, which means the actual interest rate paid by the borrower is often significantly lower than the rate quoted by the bank. [The precise discount depends on one’s tax bracket]. However, the understanding of most borrowers doesn’t extend much beyond this, which is problematic because it turns out mortgage-related tax matters are actually quite complicated.

For example, the tax benefit can only be claimed on mortgages under $1 million, and cannot generally be increased as a result of a refinancing, unless the proceeds are used to improve one’s home. Points, which are used to buy down the interest rate when the mortgage is first issued, are deductible in the year they are paid, as are loan origination fees. Lender fees, private mortgage insurance, and other settlement costs cannot be deducted.

As for home equity loans, the limit is $100,000. Paradoxically, the proceeds from a home equity loan cannot be used in relation to the home in order to be eligible for the deduction, but can be used for almost anything else, from credit card payments to school tuition, etc. If the borrower is subject to the Alternative Minimum Tax (AMT), however, the opposite applies, and the proceeds MUST be used towards the improvement of the home in order for the interest to be tax deductible. Confused yet? If so, the chart below represents the best summary of the IRS rules I have ever come across and should be a great reference when it comes time to file your taxes! 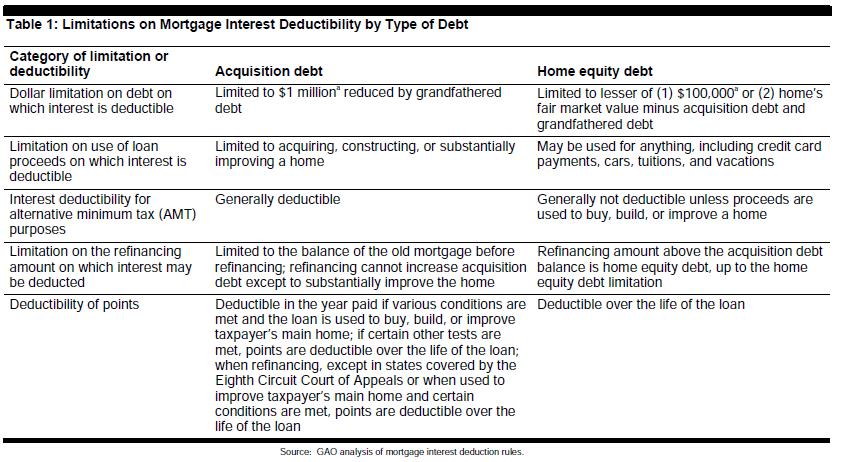 The IRS doesn’t make things easier. According to the GAO assessment, taxpayers have to go through as many as 13 steps to determine first whether mortgage interest is tax deductible, second whether points are deductible, and third the size of any deduction. Included in the official tax forms is a handy flow chart, which borrowers can theoretically use to complete these steps. However, the increasing majority of taxpayers that use tax preparation software to file probably doesn’t ever see this chart. To make matters worse, the GAO report found that such software uses inconsistent methods to determine tax detectability, sometimes even asking the borrower to make the determination/calculation himself.

The main purpose of the report was to assess the ability of the IRS to properly determine and manage mistakes in mortgage tax issues, and in this aspect, the report was scathing. Due both to inadequate resources and insufficient information about taxpayers’ mortgages, mistakes were often allowed to slide. Although, the GAO found that the claimed deduction was understated as often as it was overstated, so the net result is probably a wash for the government.

In any event, it seems clear that something has to change. Either the IRS has to streamline paperwork associated with the mortgage tax deduction, or the government needs to revamp the rules. When you consider that the deduction costs the government $80 Billion in foregone tax revenues per year – especially in the context of the current budget problems – this could conceivably become a major political issue.

Posted by Adam | in Government Programs/Legislation | No Comments »

Are you paying too much for your mortgage?

Find Out What You Qualify For

Check your refinance options with a trusted lender.

Answer a few questions below and connect with a lender who can help you refinance and save today!