What You Need to Know about Option ARMs

Published on Wednesday March 24, 2010 at 12:55 am
You’re probably wondering why I would be devoting an entire blog post to Option ARMs. After all, with the bursting of the housing bubble and the tightening of lending standards, such mortgages are all-but-impossible to obtain. During the height of the boom, however, they were extremely popular, and five years later, more than 1 million borrowers are still grappling with the consequences. 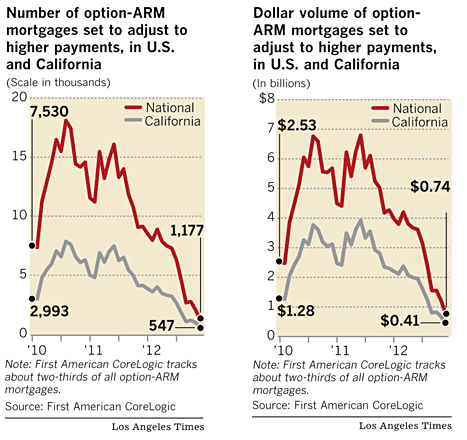 First, the basics: What is an Option ARM? Simply, it is an adjustable-rate mortgage that gives the borrower the option to choose how much he wants to pay each month. For this reason, they are often referred to as Pick-a-Payment loans. Typical Option ARMs offer four possible payments: fully amortized 15-year payment, fully amortized 30-year payments, an interest-only payment, or a lower minimum that doesn’t even cover the interest portion of the loan. Under this latter payment, the mortgage will amortize negatively, and the balance will increase over time.
There are a couple of features which make Option ARMs especially problematic. The first is that while the (minimum) monthly payment can only rise 7.5% per annum, it recasts every five years in order to make the loan fully amortizing. The result is known as “payment shock,” as the borrower is suddenly forced to make a much greater payment. The second feature is a limit to how long a borrower can continue to make the minimum payment. When the loan balance reaches 110%, for example, the borrower might be required to make the higher payment.
Option ARMs were initially only obtainable by relatively wealthy borrowers, especially those with irregular and/or seasonable incomes. In such cases, the flexibility associated with an Option ARM is a real benefit. In fact, Option ARMs can still be appropriate for those with very short time horizons (though not for speculators). During the housing boom, however, they were aggressively marketed to borrowers with promises of initial “teaser” rates as low as 1%, and claims that even by making the minimum payment, the value of the home would rise faster than the value of the loan. Other lenders used them as a basis for making larger loans to borrowers, since affordability ratios could be calculated against the minimum payment.
In 2005-2006, these loans accounted for 10% of all new mortgage issuance nationwide, and as much as 50% of mortgages in the most overheated areas, namely in Florida and California. Do the math: the first recast dates for such loans are five years later, or 2010-2011. Combined with the massive declines in housing prices, many borrowers will surely face some version of payment shock over the next couple years.
If this describes your situation, now is probably a good time to start talking to your lender, if you haven’t already done so. You might be able to obtain a loan modification. Otherwise, your best hope is for your lender to waive the $10,000 prepayment penalty that probably applies to your Option ARM and would otherwise kick in if you tried to refinance into a fixed-rate loan. Even if you have been making the fully-amortizing payment, you might want to consider refinancing, since variable rates could begin rising as soon as the end of this year.
If you’re in the market for a mortgage and your lender is still willing to offer you an Option ARM, I would think twice. Many borrowers assume they have the discipline to make the higher payment, but when push comes to shove each month, they opt for the negatively-amortizing minimum. If you’re determined to press ahead, shop around for the lowest margin (the spread that gets tacked on to a baseline index to determine your interest rate), and plan to make a fully-amortizing payment every month.
Posted by Adam | in financial planning, news | No Comments »